Note: The Garden of the Month program is suspended during Garden Tour Years.
(A large garden tour is currently scheduled for June 26, 2022.)

Look for Gardens of the Month to return in Spring 2023.

A Garden of the Month is selected from April through September

If you are interested in opening your garden to the community, please email us at [email protected], message us on Facebook @carlislegardenclub, or call Janet at 717-243-3502 to arrange an interview and visit. 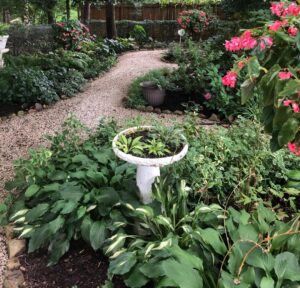 The Garden of the Month for August is the shade garden of member, Carol Henry, in North Middleton Township. In 1996, Carol contracted with the former Country Market Nursery to plan and install the topsoil and crushed stones paths with a bulb and plant diagram. Carol originally planted approximately 1,000 spring bulbs, including aneomone, daffodils, glory of the snow, striped squill, snowdrops, and 100 white ‘Emperor’ tulips. The 100 white tulips under the oak tree have since been eaten by squirrels and have not been replaced. The plant diagram was not followed completely and has evolved over the years.

The garden sits in the woods at the rear of her property bordered by 35 ‘Hicks’ yews. Her late father dug all the holes, and she did the planting. In the last five years, the yews look like they had winter burn along the west side of the garden. This year it was determined that deer are nibbling on the yews even though they are poisonous. This spring Carol had them wrapped with mesh and is currently trying to save them. Several of the yews are coming back, but several have bit the dust!

In the last eight years, her love of hostas has grown as a Charter Member and current President of the Susquehanna Hosta Society . She currently has over 70 varieties of hostas in her garden along with other shade plants such as acuba, astilbes, barrenwort, begonias, bleeding hearts, brunnera, cardinal flower, coral bells, various varieties of ferns, foamflower, ginger, hydrangeas, lamium, Lenten roses, ligularia, liriope, lungwort, black-eyed susans, and solomon seal. Thanks to the advent of Facebook, Carol recently discovered Martagon lilies, and planted several varieties last fall. They do very well in the shade. She also has a Fairy Garden in a wheel barrow with mini hostas and sedums. Carol enjoys garden art to include making hyptertufas for her mini hostas, casting hosta leaves, and making “dish” garden art.

There is NO CHARGE to come and enjoy and sit a spell on one of the benches and enjoy the peace and quiet of a shade garden in the woods.
Parking available on the street. For those with walking challenges, pull down the driveway. Garden is accessed from a downhill driveway over the lawn. Meander through the crushed stone path in the garden. Closed-toe walking shoes are suggested. 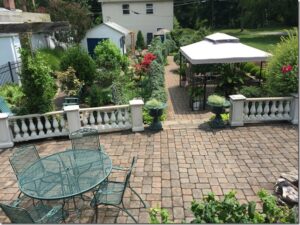 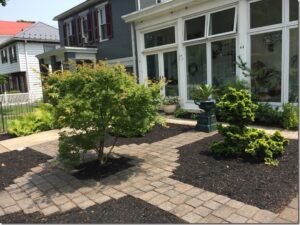 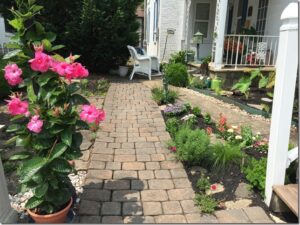 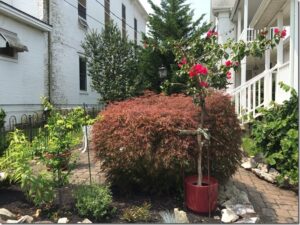 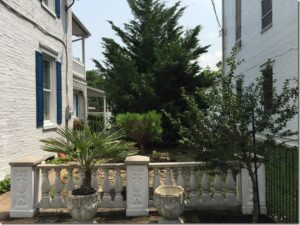 The Carlisle Garden Club travels to 204 North Baltimore Avenue in Mt. Holly Springs for its July 21 Garden of the Month, which has the feel of a garden one might see in Europe. Longtime area residents may remember the property as Marie Hankinson’s Stained Glass Studios on the glassed-in front porch. Dorcas and Richard Sherman bought the beautiful, historic house, built in 1871 on a long, narrow lot, 14 years ago and began designing and creating the garden, which was “not all done in a year’s time,” according to Mrs. Sherman.

It took three years to dig up all the grass, and now there is no lawn but instead stone terraces and paths lined with unusual evergreens and shrubbery, punctuated with colorful pots of annuals and tropical plants. There are several seating areas to take advantage of sun or shade. The Shermans like to plant boxwoods, creating a diamond shape, for example, and they like to plant two or three like shrubs together for an interesting effect.

Everywhere they have lived they have had a vegetable garden and slowly over the years became interested in planting flowers and shrubbery. Now they have vegetables, flowers, and shrubs intermingled. The area that once was a vegetable garden now has stepping stones, a raspberry patch, green peppers, vining pole beans, and a small tree in a ceramic pot in the center. They have found it useful, when designing, that taking a picture of a garden from the fifth or sixth floor of a condominium/hotel makes a good blueprint to work from.

The garden will be open to the public from 1-4 on Sunday, July 21. There is no charge to visit this Mt. Holly gem, and the Shermans will be happy to answer as many questions about the garden as they are able to. Since limited parking is available on nearby Church Avenue, the Amelia Givin Library Director has graciously agreed to allow visitors to park in the lot behind the library if desired. 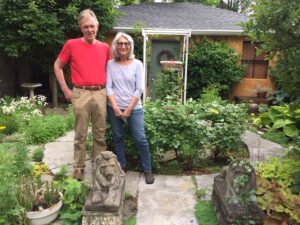 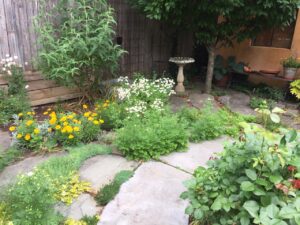 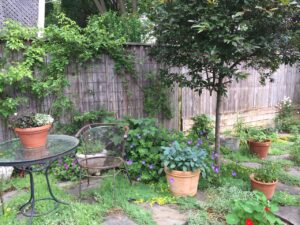 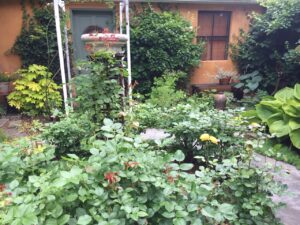 The Carlisle Garden Club has selected a hidden gem at 325 South Pitt Street as the Garden of the Month for June. It will be open from 1 to 4 Sunday afternoon June 30 in the midst of Summerfair activities. Owners Howard Batchelor and Eleanor Mitchell, beginning in 2006, have transformed a backyard they describe as a scruffy rectangle bisected by a straight concrete path to the rear garage with a chain link fence surrounding it. The only decorative plants at the time were a red climbing rose and Cranesbill geraniums (both of which remain).

Entering through a gate in the wooden fence along West Baltimore Street, a visitor now discovers a cozy, restful retreat with flagstone paving (laid by Howard, the son of an avid gardener in England), incorporating a variety of somewhat exuberant groundcovers of sedums and thymes. Closest to the house is the seating area, which includes a pergola with wisteria, roses, and clematis. Several crabapples provide shade and beautiful spring color. Another section features shade-loving plants such as hostas, brunnera, Solomon’s seal, thalictrum, and anemone.

The other sections provide enough sun for climbing roses and perennials. A circular bed of yellow floribunda Julia Child roses in the center of the garden is colorful all season long, even as late as Thanksgiving. At the rear of the garden, the homeowners stuccoed over the cinderblock structure to provide an attractive backdrop for the entire garden.

Outside the perimeter fence on the sidewalk side, the cherry, magnolia, hawthorn, and dogwood trees have grown enough to shade the seating area inside. The lavender, roses, hydrangea, and other flowering shrubs and perennials add to the streetscape as well as their neighbors’ enjoyment.

(As always, there is no charge to visit the Garden of the Month.) 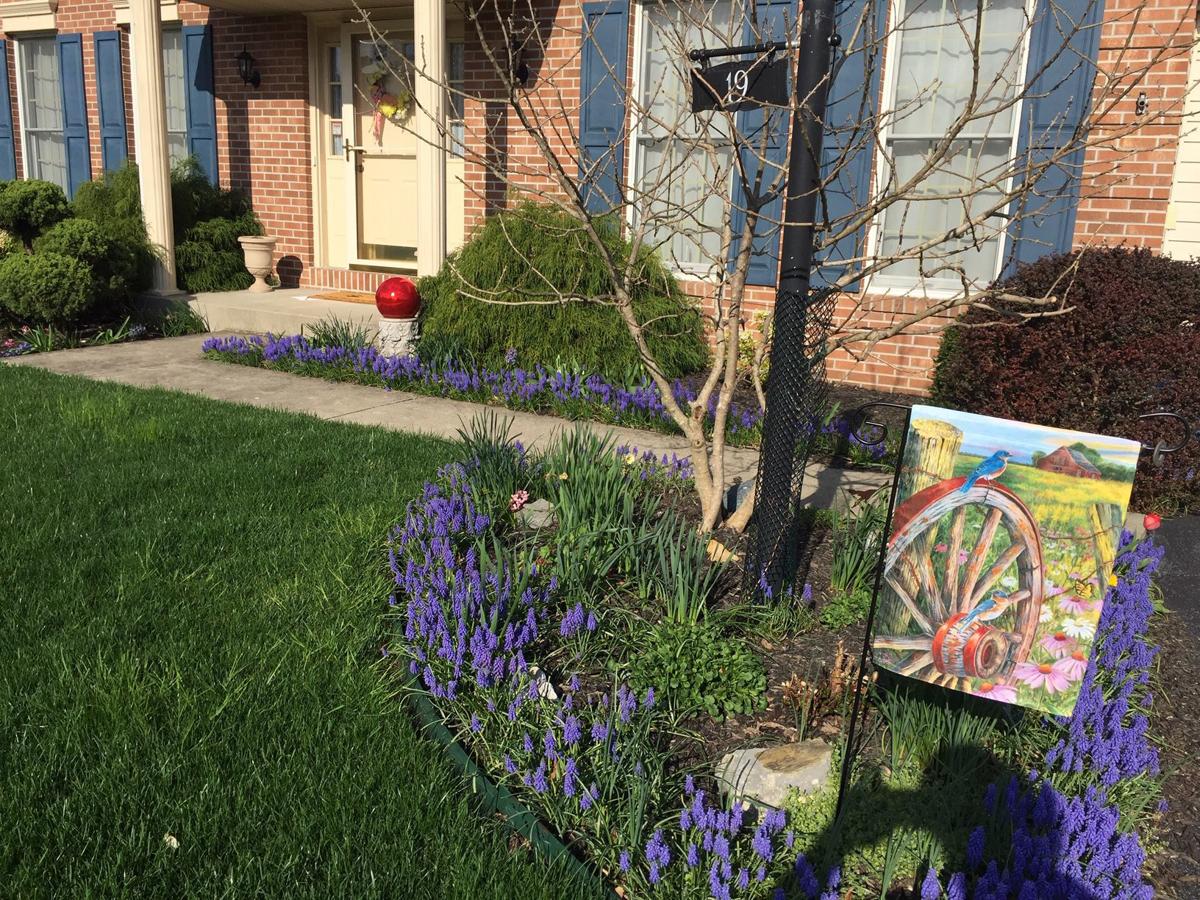 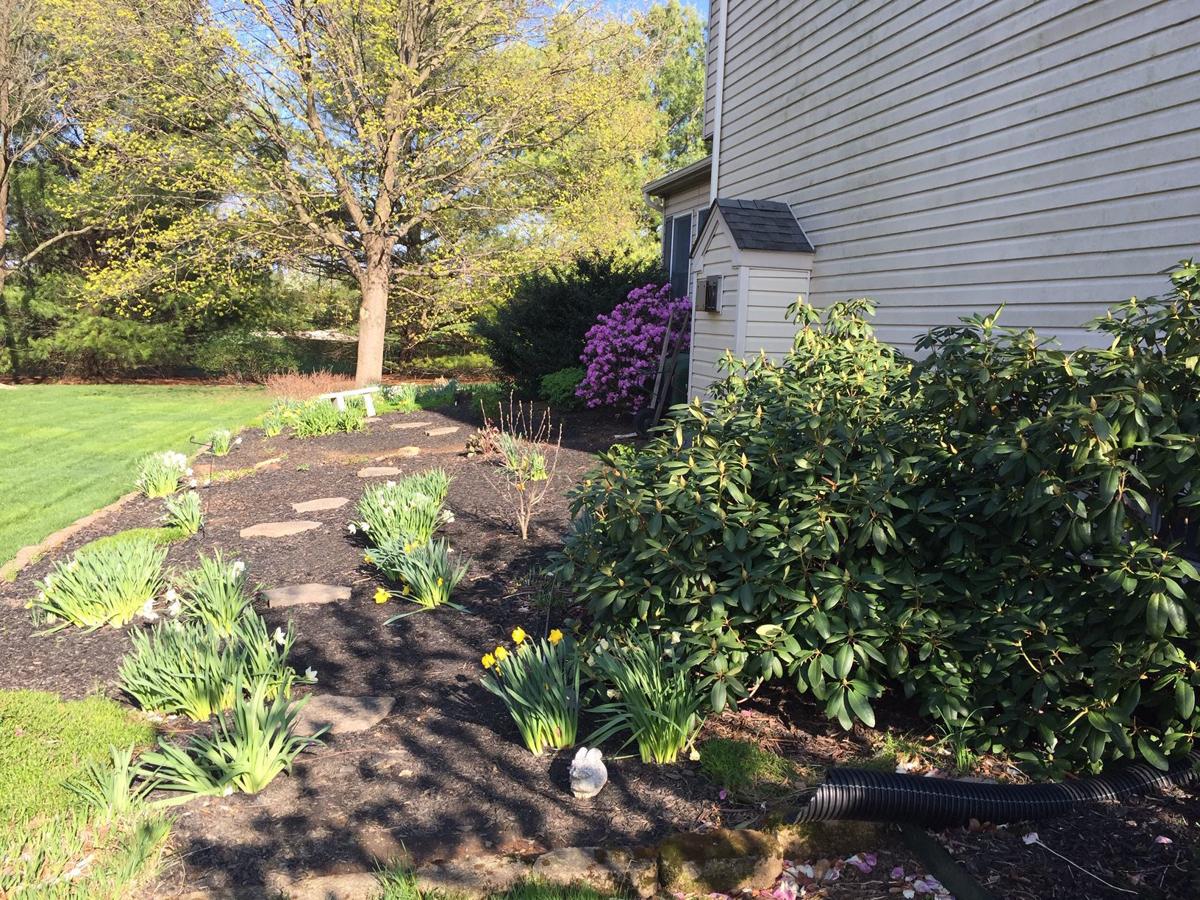 Spring has sprung at 19 Derbyshire Drive in South Middleton Township (Mayapple). On Sunday, April 28, the garden of Ellen and Ron Jenkins will be open to the public for free from 2 to 5 p.m.

The specimen saucer magnolia will be past its peak, but other garden color will have succeeded it. When Ellen and Ron Jenkins first moved to their home 13 years ago, Ellen planted hundreds of bulbs. Ellen designed and planted hoping for season-long color, taking into consideration their flat lot, sun and wind exposure. They had two large maples removed at one side of the house to provide better space and sun for flowers, and they especially enjoy the back garden inside a decorative low fence surrounding the patio. In summer, colorful annuals replace the spring bulbs there, and a variety of garden ornaments await visitors.